Every image you take is to some degree or other, graphical, writes Andrew James. By this I mean the elements of its composition – lead-in lines, rule-of-thirds, and all those other compositional guidelines. But a silhouette is all about the graphics! Compositionally it’s nothing more than a dark shape, or shapes, against a brighter background. It sounds easy, but are you getting it right?

A shape that isn’t recognisable is too obtuse for our pattern-seeking brains. If we see a strong contrast between dark and light, then we want to make sense of it, so when considering shooting a silhouette it’s important to really consider how strong tonal contrasts are going to work together. I think, a good silhouette, no matter how much it may rely on visible colour for its mood and atmosphere, should also work in black & white, perhaps with a little tonal extra tweaking. There may be exceptions to this, but as a general rule I think it stands up to scrutiny.

The composition has to be balanced between the areas of shadow and highlight – if you get that wrong then the shot is less effective. If you get it right, then whether you choose to keep the original colour or convert to black & white, both options should work.

Above is a silhouette of a flamingo flying across an evening sky. The main light is behind the flamingo, so I knew that if I exposed for the brighter sky that would throw the bird into silhouette, or at least, near silhouette. The curl of clouds above the bird is hugely important as part of the graphical composition, as is the placing of the bird against the brightest point of the frame. This colour version has the added advantage of mood provided by the orange evening sky and that perhaps means it’s better than the mono conversion here…

The loss of colour has changed the mood of this image, but compositionally it holds up well because the extremes of tonal contrast are balanced. When you think about it, simplicity of shape is almost all we have with a silhouette photo, so the narrative relies on the correct placement and arrangement of our extremes. Get this bit wrong and everything falls down.

In the next two shots (scroll between them), taken at the same time, the positioning of the first flamingo over the cloud area lets down the composition. In colour, we almost get away with it but, in mono the shape starts to blur with the mid-tone cloud. 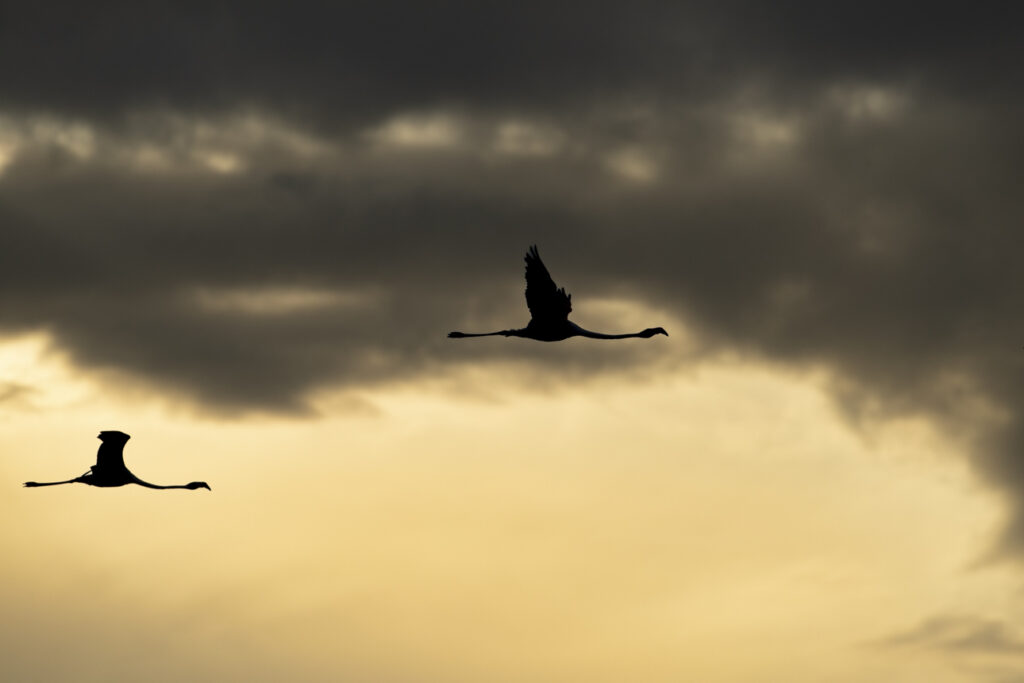 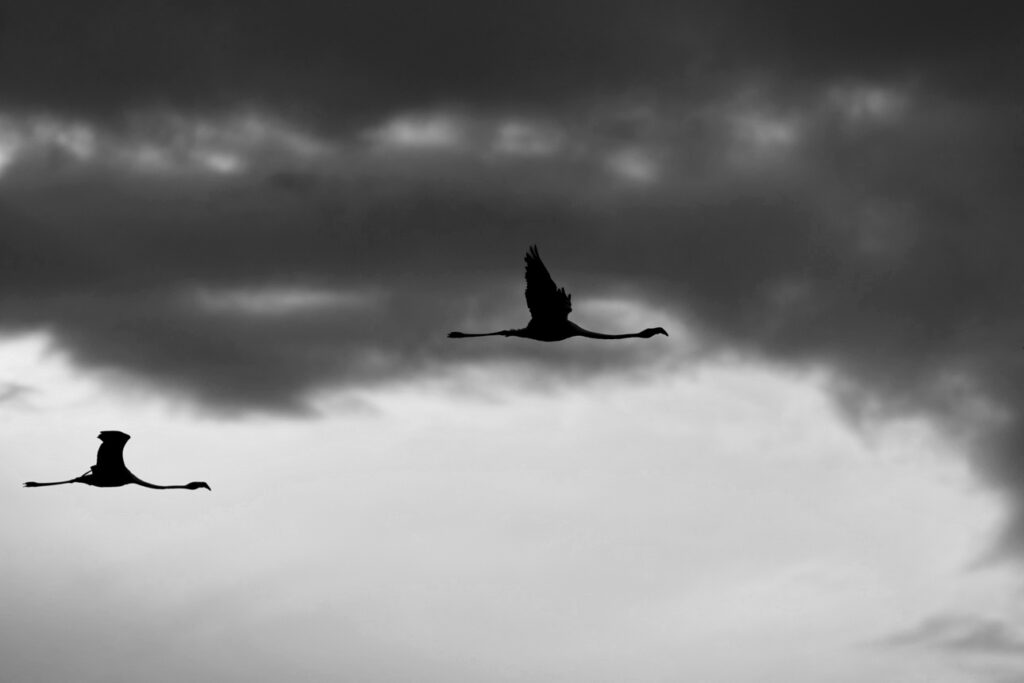 When I used to shoot slide film, capturing a bold silhouette was relatively easy because slide film only had about five stops of dynamic range. Therefore, a subject positioned in front of a brighter backdrop easily fell into silhouette. These days, with digital’s dynamic range stretching over 13 stops, it’s not as easy, but in strong contrast conditions, it’s possible. That’s why for the best in-camera silhouettes low and bright, early/late light is going to provide the greatest contrast range. The brighter the backlighting, the easier it is to silhouette the unlit subject – simply because the difference between extreme shade and extreme light is greater. In softer light and a reduced range, you might not get a perfect silhouette, where there is no detail in your subject at all.

Of course, you don’t always have to render a silhouette totally black, but if the success of your shot relies on that strong, clean dark shape against something lighter, then you might need to tweak the raw – increasing both the intensity of the blacks and the whites within the scene. I’ve done this with this shot of a lighthouse on the coast of the Spanish island of Menorca. The brightest light had dipped below cloud, making the contrast difference between foreground and background softer. But it was nothing a small nudge of the raw couldn’t change.

In this next shot, a very graphic black & white, I’ve needed to nudge the Black and Whites sliders further still in Lightroom to get the full silhouette appearance because the tree and birds were set against a flatter, low contrast and dull sky.  By increasing the contrast range, the shot has come to life. This shows you don’t always have to have intense light for good silhouettes, but you do need to help the graphical element out a bit in post-processing.

Whenever you get the opportunity to take a silhouette image, grab it with both hands. If you get the compositional elements right, you’ll have a simple but bold image that will catch the eye. Make sure that your area of black or deep shadow doesn’t over-dominate though, or you might leave the viewer feeling underwhelmed. Like everything in life, it’s all a matter of balance.