Embarking on a mini-project and using subjects close-by is a great way to develop your photography, writes Andrew James. For this mini-project, I wanted to develop a fine art style for floral subjects and used tulips as my muse. My starting point was simply to shoot lots of really shallow depth-of-field photos of the flowers – purely as a way to explore their colour, tone, shape and texture.

I didn’t want to spend too long fussing over precise focusing so simply focused my macro lens to infinity, popped the ISO up to 400, switched to Aperture-priority and set the aperture at f/2.8. The reason I was shooting with manual focus was simple – a lot of the images lacked strong contrast and that’s something AF systems hate. Instead I just slowly moved my body forward or backwards to find focus. As long as your shutter speed is reasonably fast – by which I mean no less than 1/250sec – you can get away with this. Quite quickly I was able to build up a collection of simple f/2.8 images .

Naturally, because I was shooting lots of different colours and the light was changing, I was continually needing to adjust the exposure with Exposure Compensation. The lighter petals, for example, need a +1 stop of Exposure Compensation to come out clean and bright, rather than dull and underexposed.

I made use of the late evening light in my front garden too (where the flower below is growing), to capture something more low-key as well. I wasn’t interested in showing the whole flower, just the way the low backlighting was bringing out the textures. This is something you can certainly do if you keep your camera ready to shoot throughout the day.

Bringing the project indoors
When you start to get into a subject, you can really begin to think out of the box in how you want to photograph it. I noticed we had some more tulips in a vase in the kitchen, and I wanted to bring the project indoors too. But I didn’t just want to take the easy option and simply shoot the cut flowers in the same way as those growing in the garden.

After a little bit of experimentation I came up with the two flower images you can scroll between below, both relying on colour, shape and the added ingredient of texture to give them their unique flavour. However, this isn’t, as you might imagine, texture added in Photoshop. The texture on these images was captured in-camera. 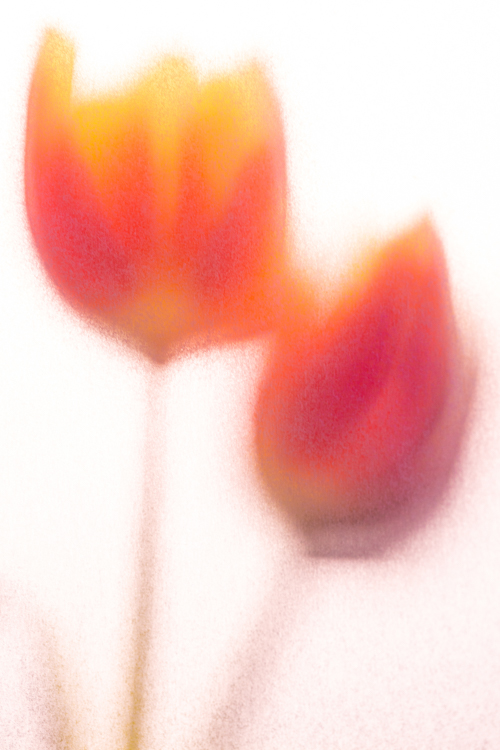 How it’s done
I simply taped a piece of baking paper/greaseproof paper to an old picture frame without the glass in it. The paper is off-white in colour and I think this is probably preferable to the browner greaseproof papers you can get but feel free to experiement! I’ve then positioned the tulips in a vase behind the frame, and behind that is an LED light (as I used for the bokeh effect in the previous project) to create some backlighting. If you don’t have one of these then bright window light or even a desklamp will also work. An LED light simply means you can set up wherever you want and its strength can be varied.

The frame is then leant back slightly so that some of the tulips are actually touching the paper. You’ll need to experiment a bit at this point with composition. My rule is to keep it simple. If you try to over-complicate it then it probably won’t work. Perhaps my favourite from a short session is the image below…

This shot was taken on a macro lens but you can use any lens you want. I shot quite a few using a 50mm lens, too. Mostly I shot at f/4 – as you don’t need lots of depth-of-field for this kind of shot. I was able to use autofocus here, as there was quite a lot of contrast for the lens to lock onto. Exposure did require quite a lot of adjustment because of the backlighting. You don’t want to completely blow the highlights, but you do want to make sure you aren’t underexposing them, too. Most of my image were shot at +1/3rd or +2/3rds Exposure Compensation.

Of course, you can shoot anything that has some transparency with this method. For this last photo I positioned two coloured bottles side by side behind baking paper that had been crunched up to give it some different texture. Other ideas could be a glass of red wine, a coloured bottle of gin and even a perfume bottle. So if you want to give it a go but don’t have any flowers, then look around the house and see what you can find.