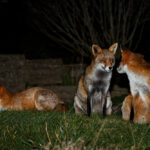 Just a very quick go to see how the updated blog system works. The ‘family’ portraits are of course our local foxes as I have a huge aversion to photographing people! After all, they can comment back. Foxes are always very polite! This is Longtail, a young male fox. He’s holding his injured right foot off the ground. Leg injuries are really common among foxes, and estimates from the Bristol Mammal Project (University of Bristol) suggested that 70% of foxes that survive to 5 years old have suffered broken bones at one time or another.   Next up is a picture of another injured fox, though the damage here is more permanent and somewhat similar to docking. His tail was likely stripped when he was very young as he’s about 18 months old and has displayed this truncated brush for over a year.  The final portrait is of our friendly vixen. She’s been visiting since she was a cub (so about two and half years now), and is looking very much the elder of the regular group.  And just a family grouping to finish… Well, that was incredibly easy!  (Edit: just changed the final image to see how editing worked). 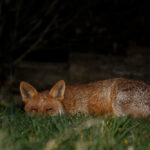 This is just a short blog to kick off with to see how the site works. I’ve been photographing our garden foxes since 2005, and in the middle of that year I started publishing a ‘fox of the day‘ photo. The very earliest images were taken on a 3.2 megapixel point and shoot camera (the Olympus C370). Here’s the very first image in the series: I graduated from that camera up through a Canon S2 (5MP) bridge camera, and then various DSLRs from the EOS 400D to the 1DXII I use today. This is another taken with the C370, which had the great advantage of allowing me incredibly close. Over the years my editing and technique changed a lot, being somewhat supercharged once I joined Foto-Buzz, but for me it has always been about documenting the garden foxes and I’ve been privileged to see climbing foxes (rooftops and trees), foxes with prey (pigeons, rabbits) and some great family interactions. This is a short video of a treetop fox (if it works). If it doesn’t here’s the direct link  More recently I’ve explored using off-camera flash, which is really enjoyable, though it restricts my movement as I can’t follow the foxes around the garden. Photographically it adds challenge and interest.  There are over 5000 photos in the series now, with a few badgers thrown (they temporarily took over the garden, but the foxes re-asserted themselves)  The full collection is on-line and updated periodically. It now has over 5400 photos (I take a short break at Christmas/New Year). The very latest photo is this one of the three current regulars. Just to note, all the images have been inserted via off-site URLs as I can’t currently upload to the new Foto-Buzz. And we could do with a save/edit option!