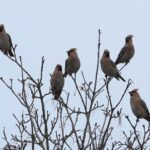 2019 has been a strange, very mixed, very different and very unexpected year (and as I write this, it’s not over yet…). So how did my year with a camera go ?  Well that was mixed too…  Mostly wildlife but mixed up with some landscapes, night and day stuff and a bit of sun and sea. If this goes to plan, each image is from a different month of the year, but lets see. First are some Waxwings which in January descended on Rowan tree near work.   Next up is a female Kingfisher.  This is notable for me as it was taken in the nature reserve just 1/4 mile from our house, but where I’ve only rarely seen a kingfisher – this being the only time one sat still and close enough to photograph. Not quite March, but only a few days late.  I think this lovely looking old fox spotted me !  Taken at another nature reserve near work this time, just before dusk. And this one was from the Foto-Buzz meet up in April in the peak district, where it rained and the wind blew… In May and this was back to the nature reserve near work – this time at first light shooting into the sun.  This is one of the lapwings that was feeding in the margins. Only one outing in June with the camera, and this was from a friends 40th birthday, where his present was a flight in this 2-seater spitfire.   And July has to be our friendly hog.  Unusually for hedgehogs it came out in the evening, before dusk (we did seek advice of a hog rescue, who said to keep an eye on it and make sure it looked healthy). August was our main family holiday in Mull, so I’m being greedy with a couple from the holiday – first a White Tailed Sea Eagle. Next, it has to be an otter.  This one came too close to photograph at one point and wasn’t at all bothered by my presence.  Even better my wife and daughter were in the car just a few metres away watching and saw it cross the road just in front of the car. Not quite Sept – as this was during the Bournemouth air show at the end of Aug, and my daughter wasn’t expecting this wave. October saw us back in the lake district and this dipper was on the river that flows into Grasmere.  And finally back to the nature reserve near work for December – where this cormorant was lovely lit by a shaft of evening sunlight.