We‘re dreaming of a white Christmas, but the truth is, right now it’s looking unlikely, writes Andrew James. But just to keep a few vague hopes alive and to have you snow ready when there is a drop of the white stuff on the ground later this winter, here are a few handy tips when it comes to shooting in snow.

Exposure
I know you are all aware that snow fools the camera’s meter into underexposing. But we all need a timely reminder of this fact and how to combat it. A camera’s internal metering system thinks the world is grey. It can’t work out the nuances of light and shade in a field of freshly fallen snow. Your answer of course is exposure compensation. It’s a lot easier these days with LCD screens and histograms to get the exposure spot-on but be prepared to try anywhere from +1 to +3 stops of exposure compensation, depending on the intensity of the reflected light that’s bouncing off the snow. As a default mode rely on +1 because that will always help. Incidentally, if you like using a highlight alert warning when you’re shooting – the thing that blinks when it thinks you’re overexposing – I’d suggest you switch if off when shooting snowy scenes as it’s too annoying and inaccurate. Instead rely on the histogram to make sure you are within dynamic range tolerances. Don’t think you always have to push the whites all the way to the right of the graph though. In brighter snowy conditions it does pay to have a small gap between the whites and the edge of the graph. And of course, you are all shooting raw, so if you need to make a few minor adjustments afterwards then you have some decent tolerances to play with.

Mountain hare: I only needed +1 exposure compensation for this mountain hare photo because although there is a lot of white in the shot, there was no strong sunlight increasing the intensity of the snow.

White balance and snow
For some reason White Balance confuses photographers when the world has turned white, and I’ve lost count of the times I’ve been asked on trips what’s the correct white balance for snow. To be frank, there isn’t one as the WB depends on so many factors so I can only tell you how I work. I shoot raw (obviously) and always have the WB set to daylight. I think this gives the most natural-looking temperature for snowy scenes as it leans towards a bluer hue in the shadows, which for me suggests the cold. But of course, if there is some warmer morning light in the scene, then it’s perfectly reasonable for the snow to have a slightly warmer hue too. Auto WB, whether in-camera or in post-processing, actually does a really good job with snow as its role is to remove any possible colour casts in a scene so it usually gives a neutral temperature when used. 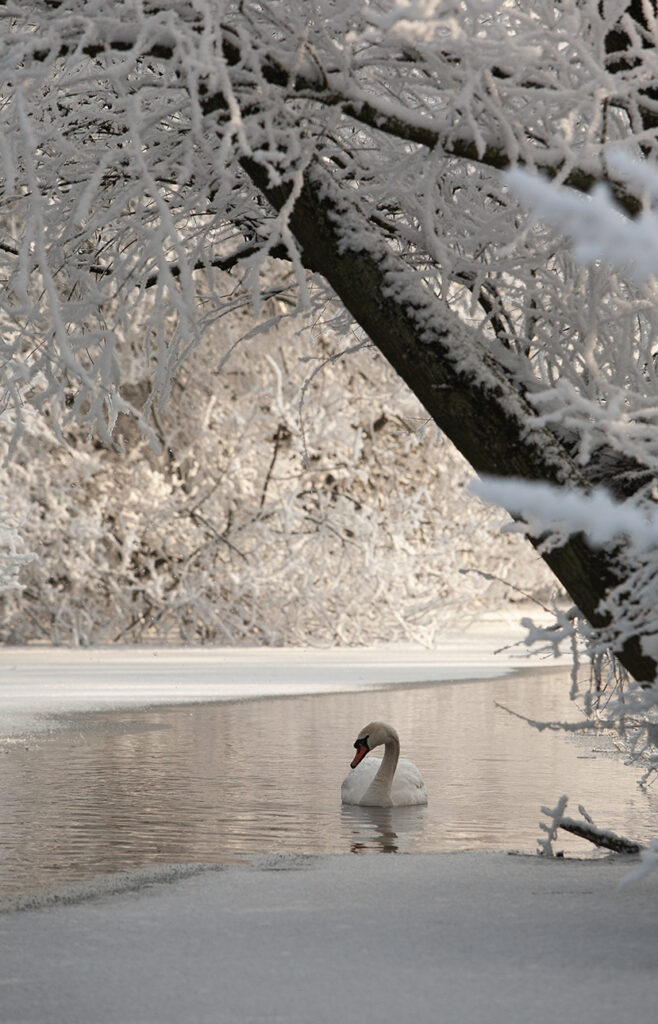 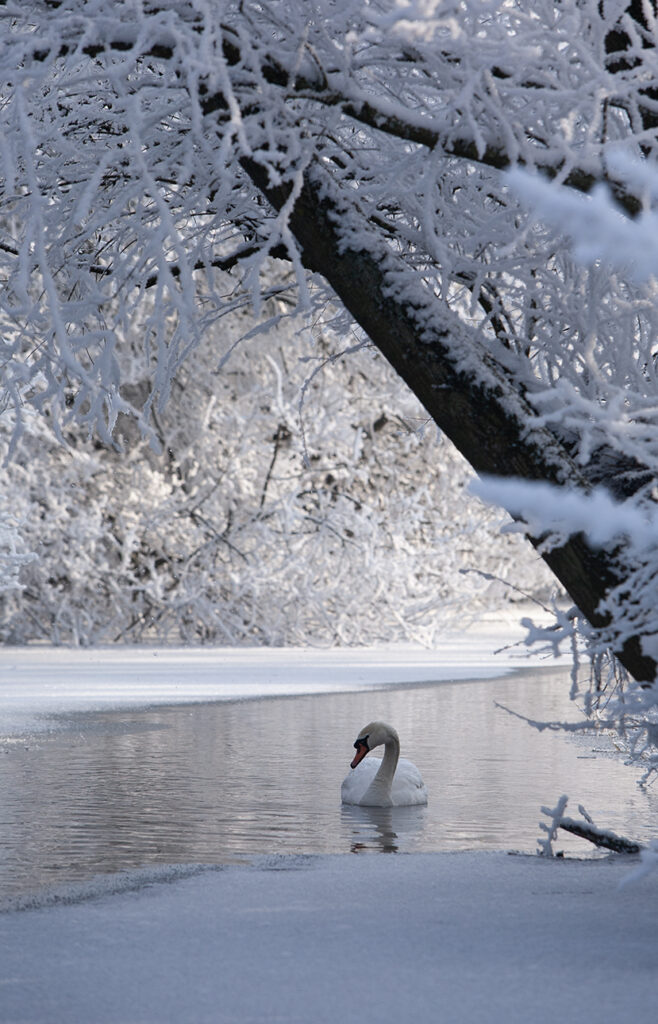 Swan lake: If you scroll between these two images, the cooler scene has been saved with Daylight WB but the warmer scene is Auto WB. Neither is right or wrong, it’s simply down to which you prefer and the atmosphere you want to achieve.

Snow, autofocus, and a telephoto lens
If you’re ever lucky enough to be out shooting wildlife while it’s snowing, there’s something you should be aware of. Autofocus doesn’t like snow. It’s not an issue at shorter focal lengths but as soon as you use 300mm or more, that narrowed field of view means that the falling snow is more likely to play havoc with AF. It just can’t cope if the snow is heavy, because it’s trying to make sense of the constant movement in the frame, but it doesn’t know where to focus. There is only one solution in these rare conditions – gloves off and use manual focus!

Posing penguin: Swirling snow made AF almost impossible for this shot, but mild frost bite is better than an out of focus photo!

1 If you can get around the AF issue, actually shooting a scene when the snow is falling can create some really interesting impressionist-style images. The heavy the snow falls, the better. Look for strong contrasting shapes to create your composition.

2 We all love a bit of arty tree panning – and it’s a brilliant thing to do when there has been a snowfall in the woods because there’s going to be lots of natural contrast between the trees and the ground. You know how to do the rest, select a shutter speed around 1/15sec and start moving the camera up and down to create some art. Always try to find a group of trees where the trunks have their own space because it accentuates that contrast and the shapes.

3 Snowy scenes are often very monochromatic, but they do lens themselves very well to a full black & white treatment. Look for subtle tonal changes within the scene but almost make sure you have some deep blacks and strong whites to create clarity. Remember you’ll need to play around with the colour channels in the Black & White mixer panel to get the balance perfect.

4 If you’re shooting people in the snow, a blip of fill-in flash can help them stand out and it makes falling snow look pretty good too. I’ve always loved this fun shot taken a few years ago now, because it captures just how much fun snow can be! The use of flash also accentuated the meteor -sized snowball hurtling directly towards your intrepid photographer. I can’t recall if it was a direct hit!

5 Look for details in the snow. A fall of snow does funny things to the landscape and often creates unusual lumps and bumps that, in the right light, can look really interesting. You have no sense of scale either if you just concentrate on the shapes themselves, so it’s really effective way to create some abstract images.

6 The most important thing about snow is how it totally changes the landscape and even areas and objects that you’d never look at twice normally can be transformed into simple but striking photos. Whenever there’s a decent fall of snow, I’m up and out of the house first thing to look for simple shapes and scenes that are unique to the weather.