Despite the vagaries of seasonal wildlife, I thought that since the frogs have been doing their thing in my neck of the woods in the last week, I’d look more in-depth about how to get some good shots of the little critters to follow-up on last week’s tough Weekend Challenge, writes Andrew James. Depending on where you live in the UK, your local frog population will either have:

A: Already done the business and left the kids to fend for themselves.

B: Be thinking about doing the above but not actually doing it.

C: Not even be thinking about it yet because it’s still too cold.

Getting good shots of spawning frogs isn’t easy for several reasons. Firstly timing. The love-fest can kick off at any point during the spring. It’s all temperature related so it depends on how mild the spring is where you are. But typically, as soon as the weather warms a fraction, your average frog will turn his and her mind to a spot of procreation.

The second problem is where they do it. They will insist on doing this stuff in the water and that means it can be tricky to get the camera to where they are! The good news is, they prefer the shallow margins of ponds for spawning so at least there is a chance to get yourself into a suitable position without actually diving into deep water, although you can if you are so inclined! Lastly, when in the throes of passion, frogs might lose a bit of their natural cautiousness but they are still timid and wary. Let’s face it, if you were likely to get swallowed by a heron at any moment while trying it on with a partner, you’d be a bit wary too.

Location identification is the key starting point. Where are they going to spawn? Frogs (and toads) tend to spawn in the same place each year so that’s a big help! Did you spot any frogspawn last year so can keep an eye on activity in the same spot? If not, ask around. My little wildlife pond has had spawning frogs in it this last week and I’ve been keeping a close eye on what’s going on, although they do seem to be doing most of the jiggy-jiggy activity very early morning just to thwart me. The images in this article were taken at my village pond, following a tip-off that frog love was in the air.

The point I am making here, is that if you want to give yourself even half a chance of being in the right place at the right time, then you need to put some groundwork in on the intelligence side of things. Go and find that ‘smoking gun’. You might get lucky and roll up somewhere just as Mr and Mrs frog are getting jiggy but if you work hard at identifying places where you know it’s going to happen you will increase your chances of good shots tenfold. Maybe you won’t get lucky this year but come next season, you’ll be ahead of the game.

Using a zoom lens
So what do you actually need to get your shots? If I had to pick one lens for this it’d be a telephoto zoom lens. The zoom gives us the flexibility required, while the telephoto means we can sit back a bit, quietly watching and waiting without disturbing the action too much. Of course, a macro lens is worth having too but frogs are relatively large amphibians so it’s not an essential. You may well get away with much shorter focal length zooms, even wide-angle zooms, it all depends on how tolerant your amorous amphibians turn out to be.

Of course, I can’t guarantee the action is going to happen where I want it but before settling into position, I’ll usually sit some distance away and watch. Observation is absolutely key to making some decisions around positioning and, as a rule, much better than jumping the gun and just flopping down where you think things are going to happen and scaring everything off within a 50 metre zone.

With the zoom, composition can be adjusted really easily and if you find your subject does indeed pop-up closer than expected, then a quick low-level shimmy back can always be utilised, although for most of the time you should be able to stay flat and motionless. Uncomfortable though it is, I’d rather lie forward with hands on camera and lens waiting, rather than have the camera somewhere near by that has to be reached for if a frog or frogs move into position. I know from experience it often doesn’t take much movement to send frogs under the water where you can’t photograph them. Well, you can but that’s a whole different ball game! The only movement I’ll do – apart from the previously mentioned backwards shimmy – is a slight raising of the camera and head via the elbows. This might be necessary for a better position, to avoid foreground vegetation, or to get a better reflection. Often though, the flatter you are the better. There can be times when the frogs are so preoccupied with mating, you won’t bother them at all but take the ‘softly softly’ approach anyway.

All this is a lot of talk to get the shot but once in the low level position at an ‘active’ site, the rest is relatively easy. Being low means we can get a much cleaner shot. Especially (as is usually the case), the frogs are mating in and amongst reed beds. Aperture choice is effectively down to what is in the background. If you need to help the subject stand out, then choose a wider aperture. I’ll drop down to the widest aperture possible if I want to create the foreground/subject/background separation but when shooting at f/4 or even f/2.8 if the lens allows it, I’ll be absolutely sure my focus is bang on the lead eye. As always for wildlife photography, continuous focus is the way to go.

Shot at f/8
At f/8 we get lots of detail on the frogs themselves but, you could argue, that the background reeds are slightly too much in focus for good separation.

Shot at f/2.8
Shot at f/2.8 the background drops off in focus considerably but we lose some of the detail on the body of the frogs. It’s basically all a compromise between the amount of necessary sharpness on the main subject and how that sharpness impacts on any distracting elements behind. An aperture of f/4 might have been better for this shot but the mating pair disappeared before I could get it!

Perseverance and patience
It’s a simple fact that for most forms of wildlife photography you need oodles of the two ‘Ps’ – perseverance and patience. You may also require another ‘p’, although ‘potty’ may be what this all sends you. But what’s great is that when you do get yourself into a position with an active subject in front of you, you don’t need much else. Effectively you are shooting a tiny viewpoint, so one or two frogs and a foot square of pond no bigger than a puddle can look awesome, so the effort is worth it, I promise.

Lighting
I much prefer natural lighting, so a little bit of sunlight filtering in from the side is perfect but, if you want to go to the effort of adding some flashlight to model your subject from one side or the other, then get it off-camera. That way you could quietly drop it into position on a mini tripod so that it’s just above the water line and with the trigger and receiver talking, you can add that extra dimension. However, it does add an extra complexity you might not want, so if it’s your first frog-fest, then stick with ambient lighting and just make sure your shutter speed remains high enough to handhold and shoot.

Expect the unexpected
We all know wildlife is unpredictable, therefore we should always be vigilant and expect the unexpected. When the frog in the next image suddenly popped up in the middle of the spawn I had no prior warning and there was several reeds between me and it. A slow, low shimmy left gave me a slightly better shot (although still partially obscured) but also very wet arms and ultimately a camera based caked in pond mud but I got the shot. Two frames to be precise because I made one move too many and it vanished from sight never to be seen again. It should be noted that at this point I was chancing my arm with my 100mm macro lens so needed to be closer to the action than if I was heeding my own advice and using my telephoto zoom!

Finally – the frogspawn itself
Even if you can’t get a shot of the frogs themselves, don’t ignore the frogspawn. Here are a few shots to taken on different lenses and at different apertures to give you some ideas… 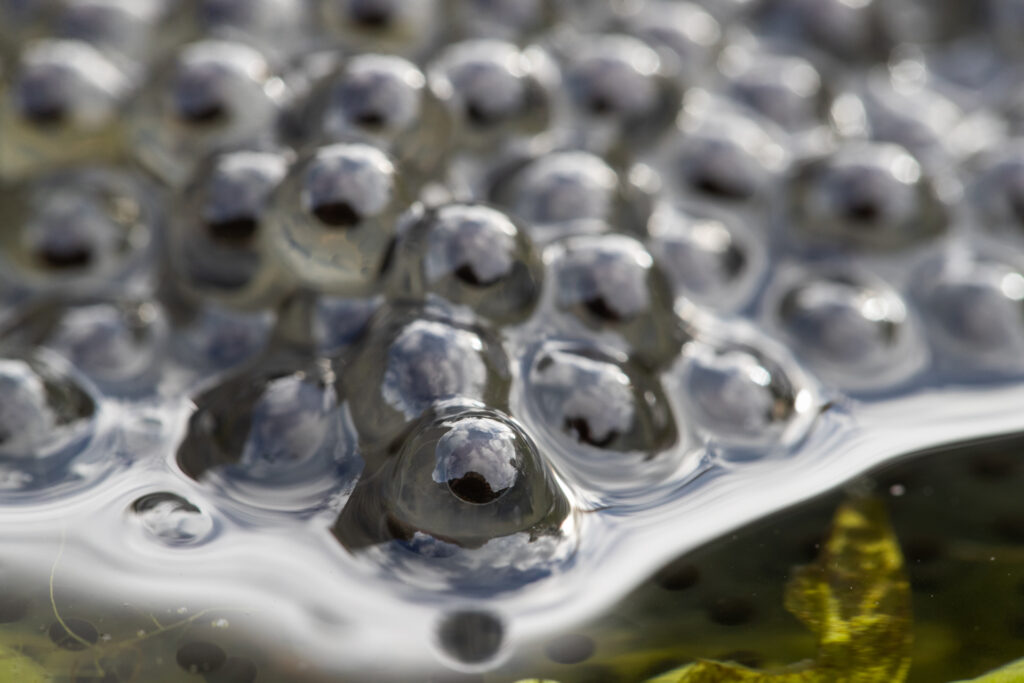 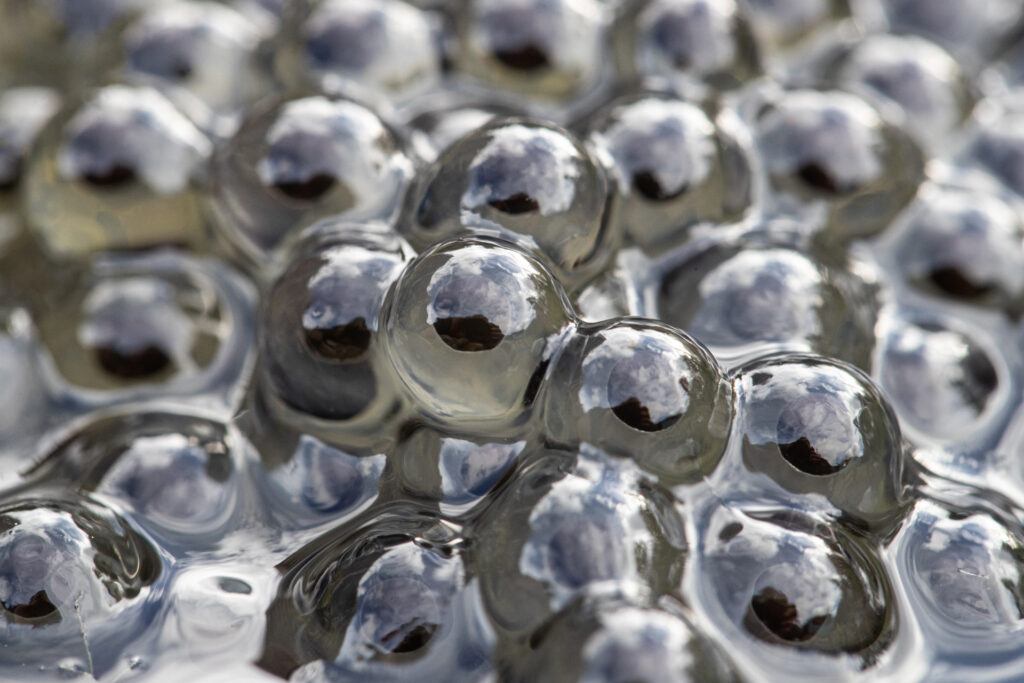 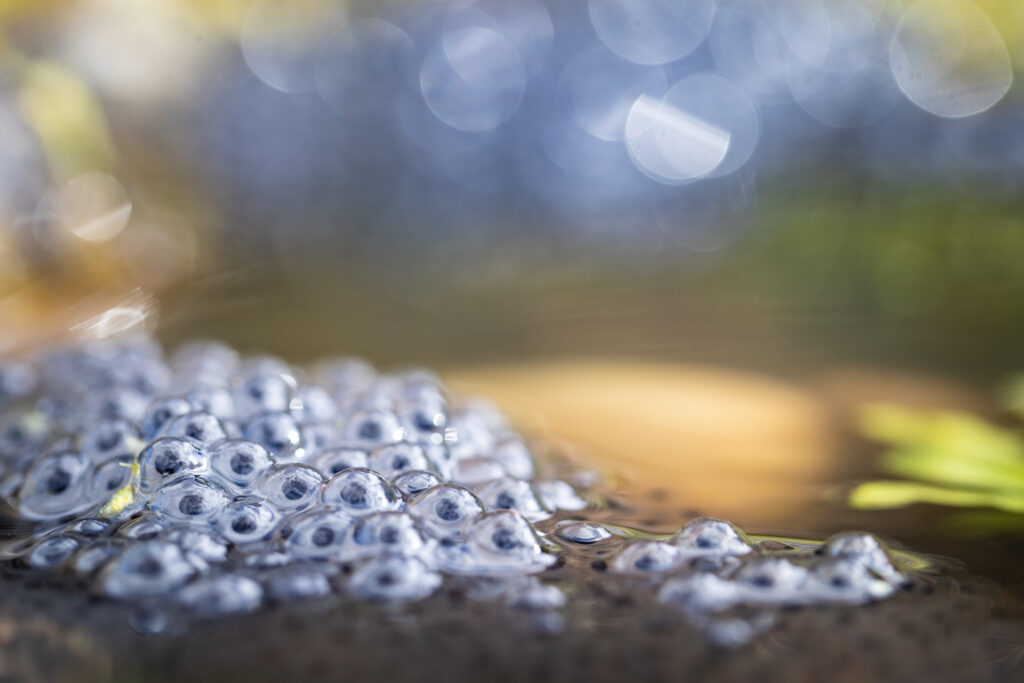 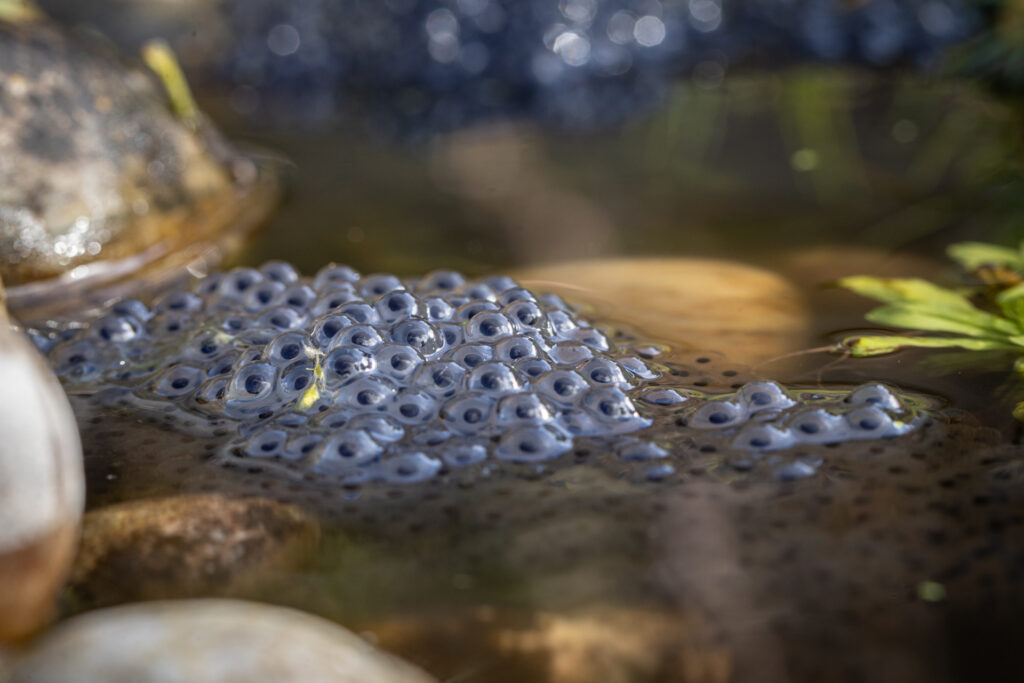