Creating the rather surreal look of static trees that have been given some ‘vertical’ motion is all about controlling the shutter speed and camera movement, writes Andrew James. I call this tilt or vertical panning but I’m sure there are others names for it out there! Of course the fundamental difference between normal panning and tilt (vertical) panning – other than the direction of the camera movement – is that in the case of the subject we’re looking at here, trees, they are static. This means you can have as many goes at it as you like to find a shutter speed that creates the look you are after.

Does it work on all trees?

In principle yes, but I find the technique is much more effective on slim, uniform groups of trees where there is also a good contrast between the tree trunks and the background. If the trees and the background tones are too similar then the whole image can look rather ‘mushy’ because it lacks contrast.

This is why trees in snow have an instant appeal. For example, the photo below has an abstract quality but, because the greenish trunks stand out so well against the white background, it’s still very recognisable. And if you are wondering what the slight texture in this shot is, it’s simply the snow that was falling heavily at the time. It certainly gives it an extra painterly feel.

Assuming you’ve found a group of trees that you think would make a good tilt-panned shot, what do you do? Firstly, it’s important to think about composition. If the trees are too tightly packed or criss-crossing each other then it’s possible that the composition will look too messy. I always choose the tree closest to me as my starting point and then look to see how the other trees to the left, right and behind are likely to interact. I also prefer to use a focal length of about 70 to 100mm to tighten the composition but this isn’t a strict rule – you can try any lens you like to see what affect you get.

I also focus on the tree that is closest, just to give me an anchor point. I will usually do this in autofocus and then switch to manual because I know that as long as I don’t move, it’s position is fixed.

For this type of shot I usually work in Aperture-Priority. That’s Av or A on your camera’s dial. In this semi-automatic mode, you choose the aperture while the camera selects a corresponding shutter speed. You may be thinking at this point, why not Tv (also known as S), which is Shutter-priority, where you choose the shutter speed and the camera selects the corresponding aperture? I rarely, if ever, use shutter-priority. If I’m not using manual then I will work in aperture-priority because I prefer to control shutter speed via aperture changes and/or ISO changes.

So in this instance, I will simply select an aperture with a large number, such as f/16. This means there is less light getting into the camera and that means the shutter speed falls. Incidentally, the camera will also be on the lowest possible ISO to help achieve a slower shutter speed.

The next two images show you the difference between a ‘straight’ shot (1/800sec) and a vertically panned shot (1/25sec). Although the result in this case lacks that contrast I was talking about so isn’t a successful shot. Scroll between them to see what I mean… 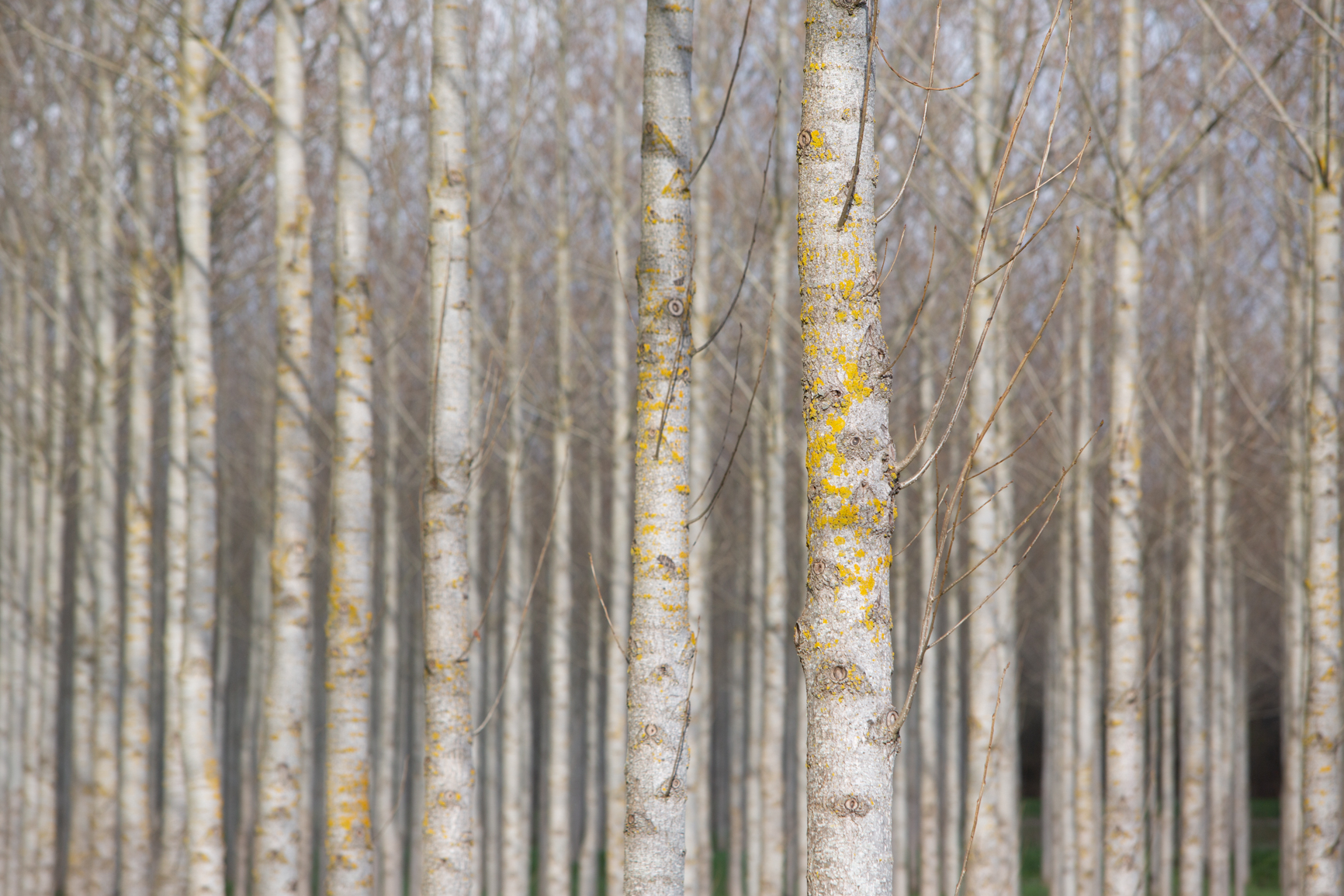 Watch out for sensor dirt.
There is one thing I should mention here and that is if you have a dirty sensor this technique is going to show it. Fortunately most modern DSLRs have built-in sensor cleaning that activates whenever you switch off so the problem isn’t as big a headache as it once once. Even so, any little smudges and marks on your sensor will stand out like a sore thumb, as you can see from the image below. The sensor is really obvious for two reasons. Firstly we are shooting at a small aperture and because the dirt isn’t subject to the same motion blur as the trees so it stands out like a sore thumb. The key here is to keep your sensor very clean or be prepared to take time to remove all the offending blobs. Check out my video on using Visualize Spots, it might prove helpful!

It doesn’t really make a huge difference whether you fire the shutter on the upward tilt or the downward, unless you want to be sure you are including a certain part of the scene in front of you. For example, if I want to make sure the ground is included in the shot, then I will fire the shutter on the upward tilt so I can be certain that I capture that part within the frame successfully. The best way to understand the ‘nodding dog’ technique is to watch it in action, so here’s a video of me doing it that will show you exactly what I mean.

You should be ready to try this yourself now. Be prepared to experiment a bit and not every image you take will work but if it doesn’t just delete it and try again! I said right at the start that the success or failure of this look is dependent on the contrast it creates so I’ll leave you with an image of some French trees where it’s worked perfectly. The exposure for this shot was 1/30sec at f/16 (ISO 100) and the lens was a 70-200mm at 100mm.